Bringing hand-made spectacles back to London

As part of our journey to Re-Define Wealth we are exploring what “A Life Well Lived” means: interviewing artists, entrepreneurs, explorers, and change-makers as they share some of their stories and ask “what is my life well lived?”.  Here, Tom Broughton shares with us what it means to him.

“I took their principle of taking a very traditional industry and making it relevant, efficient and modern without compromising on the craft”

“I took their principle of taking a very traditional industry and making it relevant, efficient and modern without compromising on the craft”

He also shares some of his thoughts on success, inspiration and what it means to him to live a life well lived.

“When I first moved to London I was 20 years old, and I got spat out at St Pancras Station. I ended up settling in Kings Cross and I have lived in the same flat there for nearly 15 years. It’s on a road called Cubitt Street and used to be the building yard of the three Cubitt brothers. When I researched a bit more about them, I found out that they set up the first ever ‘modern’ building and construction company.”

“I took their principle of taking a very traditional industry and making it relevant, efficient and modern without compromising on the craft, and applied that to spectacle making. So that’s where the name Cubitts was born.”

“We wanted to try and tell that story throughout the product as well, so we used a butterfly rivet shape attributed to a Lewis Cubitt design on all of our frames. It’s all of these little, consistent references that marry up our principles, the brand and the product.”

“Cubitts launched four years ago this month (October) but the seed was originally planted when I first started wearing glasses. I wore spectacles all the way through my teenage years and my twenties, and for me they were something I loved wearing. I had this kind of emotional relationship with my spectacles.”

“Before I threw my full weight into Cubitts I was doing consultancy but specialising in children’s television. I spent a long time learning about the economics of things like Peppa Pig and Teletubbies … but there was always this dream or desire to design, make, produce and sell spectacles.” 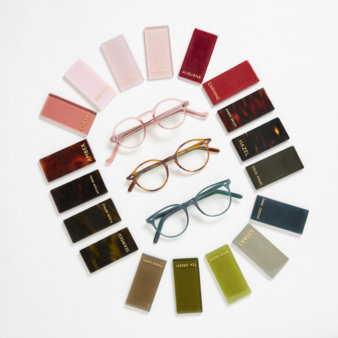 “A couple of things happened along that journey, one of them was meeting a chap called Lawrence Jenkin, a master spectacle maker. He’s been making spectacles for 50 years or so and used to run a company called Anglo American. He took me and one other on as apprentices; the first spectacle making apprentices in generations. That allowed me to really understand materials, design and the relationship between someone’s face and optical measurements, and ultimately gave me the confidence to launch Cubitts. We started online and after a year we got our first bricks and mortar store, and now here we are, four years later with five sites and 40 people.”

“I think the most important thing about running my own business is enjoying it. It’s stressful, it can be lonely, it’s extremely hard work and completely all encompassing, so you need to counteract that by doing something in an industry and in an environment that makes you feel good.”

“As an entrepreneur you end up having a relationship where your work becomes you, and you become your work. You don’t really know where the company ends and you begin, so none of it really feels like work, because it affects every single part of your life.”

“I would say that success for a new company at just four years old, is being alive, solvent and growing. Having the ability to reinvest and improve, because as a small company you’re constrained by the boring practicalities of cash, paying VAT and invoices, and all of those things can swamp you. Just having enough customers and a team around you that allow you to feel you’re going down the right path I think is definitely a measure of success.”

“I think personal success is doing something that you feel represents you, that you’re proud of, and that has integrity. If it’s something that people wear on their face every day, they have that emotional connection that I had 15 or 20 years ago when that seed was first planted. Having an end product that I feel proud of is what continues to motivate me.”

On a Life Well Lived

“To live a good life I think you need a purpose. You need something that gives you meaning … unless you’ve got an overall purpose, it’s very difficult to know if you’re going in the right direction.”

“The things I find the most fulfillment in aren’t necessarily linked to their magnitude, or difficulty and I find some of the smallest things can often be the most rewarding. “

“The things I find the most fulfillment in aren’t necessarily linked to their magnitude, or difficulty and I find some of the smallest things can often be the most rewarding. For example, last night we held a spectacle making class; nearly everyone from the company turned up and there were still people here at midnight last night. It is things like that, that I get a huge amount of enjoyment from, so I don’t think it has to be big stuff. Sometimes it’s just as simple as seeing other people engage with something you have felt passionately about for such a long period of time.”

“I would say that having lived in the same home for nearly 15 years – the longest I’ve ever lived anywhere – a home is about familiarity and comfort. Especially having started a business and leaping into the unknown, when every day is filled with uncertainty and decision making, and no matter how confident you are, you will always worry. That’s something innate about human beings, we just worry.

The world can be kind of scary, so having a home that you know, and feel comfortable in is so important. You know where things are, you know where to put your keys, you know how many jars of mango chutney you have in the fridge, you know every little corner of that place and it gives you amazing shelter and respite from all of the scary uncertainty of the outside world.”

“Wealth is a really strange, slippery concept. I mean I’m incredibly wealthy by being a white, educated male born in a western European democracy. Just having that is incredibly powerful and so above that, I don’t think about it in monetary terms.”

“It is about being able to enjoy the scarce thing that is your time, and that can simply be about having flexibility do to something you enjoy. Working with people that you like, having lie-ins on a Saturday or going for a run, it’s much more linked I think to experiences and behavior than it is to any kind of financial assets.”

On Life After Work

“I can’t ever imagine a time when I’m not working. The idea of a time when you take up gardening and potter around, I just can’t ever image doing that. Even if there were better people than me running Cubitts then, I’d like to think I’d always be involved in the company. Even if I wasn’t – perish the thought – I’d want to be involved in something else; whether it was making chess sets or boots, or fiddling around in a workshop or even learning how to code… Just something to keep your mind busy and active.”

“The top of my life goals list is probably to nurture this little company and turn it from what is still a kind of a small, esoteric, London-based company into a global brand, without compromising what we are about, which is a brand that really cares about our product and the service. I would like to give you an answer that wasn’t just about Cubitts, but it’s been such an all-encompassing part of my life I now feel a duty and responsibility to nurture it from a little troublesome toddler into a beautiful, blooming young adult.”

“If I had a week left on earth I would visit a few places I have always wanted to. One is in Afghanistan – it’s called the Minaret of Jam and is an amazing Islamic tower in the middle of the path where the Silk Road used to run. It is number one on the Unesco at risk world heritage sights. I’ve been vaguely obsessed with it for about ten years so I would go and see that, and I reckon in a week I could get there and back.”

What is your life well lived?
Read More
SHARE THIS ARTICLE