As part of our journey to re-define Wealth we are exploring what “A Life Well Lived” means: interviewing artists, entrepreneurs, explorers, and change-makers as they share their stories and ask “what is my life well lived?” Here, Martyn ‘Simo’ Simpson, the owner of London’s oldest Whisky specialist, Milroys of Soho, talks to us about his businesses and what living well means to him.

As we discovered during our ‘Ode to Burns Night’ event at House of Killik Soho in January, gin isn’t the only spirit that is experiencing a revival. In 2016 whisky exports were at their highest levels in three years, with a record 18 new distilleries opening in Scotland last year. And whilst this might pale in comparison to the number of gin distilleries or craft brewery’s that have popped up all over the country in that same time, when we bear in mind just 20 new distilleries were opened over the 15 years before that, it paints a convincing picture of the spirits increasing popularity.

“Milroys are the oldest whisky specialist in London” begins Simo “and have been going since 1964. It was originally set up by the Milroy brothers, Jack and Wallace and their idea was to bring single malt scotch to London. Pre 60’s, the majority of whisky in London was all blended because transport links weren’t exactly brilliant up to the highlands back then. The Milroy brothers visited distilleries and asked them to produce single malt for them to sell exclusively in their shop.” 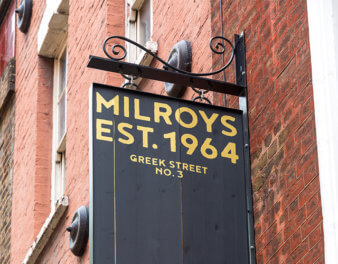 “I used to own a restaurant on Wardour Street, and Milroys got me into whisky about 10 years ago.” Explains Simo. He can even remember the whisky he drank that convinced him this was his calling. “It was an independently bottled Bunnahabhain, an 89’ single cask, so limited to a couple of hundred bottles and I just thought it was amazing. It wasn’t a distillery bottling, it was an independent bottling and when I asked if they made more of it they said ‘no, no one wants to’ and I couldn’t understand why. Here was this amazing, unique, rare whisky but at a fantastic price point.” And that was it, he says. That was his light bulb moment. “I ended up selling my restaurant, I put a business plan together, got some investors and started this.”

“This shop has been here for 53 years, I’ve owned it for about three, but the brothers originally sold it in the mid-90s.” Between then and when he bought it, it changed hands between a number of corporations but was slowly losing its individuality and heritage.

“This place is an institution and I wanted to save this little bit of Soho.”

“Milroys was going downhill, the name was going to be lost and I didn’t want to see it die. This place is an institution and I wanted to save this little bit of Soho. So we brought it back, filled the shelves top to bottom with a curated list of whisky. Everything we sell here is hand-picked by us – there is an awful lot of whisky in the world, millions of bottles – so we do all of the hard work and curate a collection of our favourites.”

As always, we are interested to know whether following your passion can ever really feel like work, but as Simo explains, he has to remind himself that it is work. “My job is great, I love it, it can be really fun, but it can also be really boring. When you run your own business there is still paperwork to do. When I get here at 9 o’clock in the morning I am still straight on my laptop, sending emails and doing spreadsheets … but then when you’re here on a Friday night, drinking with customers who become your friends, that doesn’t feel like work at all.”

“The hardest thing about being an entrepreneur is that there is no structure, you have to make your own”

“People who are employed have a 9-5pm structure to their lives. The hardest thing about being an entrepreneur is that there is no structure, you have to make your own, and that changes every single day. If you give yourself that structure it can feel like work, but you need to do that, I have to make it feel like work if that makes sense otherwise it’s easy – especially when a business like this is doing well – to let things slide.”

Simo tells us he has only ever been employed twice in his life, and has otherwise always run his own businesses, some more successful than others. So as a serial entrepreneur what advice can he offer people looking to take that leap? 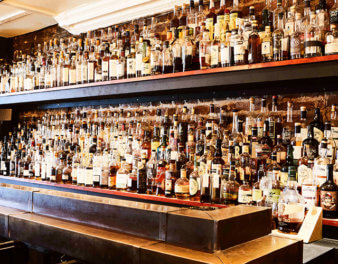 “It’s not going to be easy, it’s going to be really hard. I think when I started out here I was probably doing 100 hours a week. I was working in the shop, at the bar at night, literally suffering from exhaustion. It was tough, but I was waking up every morning to do something I loved. Setting realistic expectations is really important too. So I think the best advice I can give to people is don’t believe your own hype and be prepared to work, a lot. But as long as your hearts in it and you work hard” he says “you can watch your passion grow, and that’s the best thing about being an entrepreneur, you can control your own future.”

“Success for the business is the people that come in here. When you boil it down we sell luxury goods, it’s whisky, a phenomenal liquid, one of the most complex on the planet, and we love it. Everyone that works here loves it. We can taste the difference between every bottle in here. It’s partly our job, but it’s also about being able to pass that on. The biggest success for Milroys is being able to pass on our passion to people. Whether they go on to buy whisky from elsewhere or come back to Milroys, success for me is about sharing our passion with people. The success isn’t necessarily the money, it’s the fact that people are coming in here, and they want to come here. That’s the true success.”

“That’s a difficult question because if I hadn’t of messed up years ago, I wouldn’t be where I am today and I am really happy where I am now. You have to make mistakes along the way, if you look at even the most successful entrepreneurs they have all made mistakes but you work through it. It’s having that determination to get up and work through it.”

“Wealth transcends money, it’s more about having things that matter to you in your life, because a pound will have a different value to everybody. Whether it’s the person sleeping rough on the street or the millionaire living just down the road. So for me true wealth is having something that’s important to me.”

“For me it’s being able to get up in the morning and go and do something you love.”

“I am a very simple guy, I think I probably own one shirt. I go to all of my board meetings in t-shirts and jeans, with my dog. For me it’s waking up in the morning and being able to do what you love. If this business made millions or not its fine, because I love what I do. A lot of people get up and complain about their jobs, and yes, I still complain about this job sometimes, but I still love it.”

“So for me it’s being able to get up in the morning and go and do something you love. That for me is true wealth and happiness. I’ve been lucky enough to find my true passion, and I get to do that every day.”

When it comes to finding fulfilment, Simo explains that it’s really easy to find doing what he does because it comes from other people. “When people are just happy to be here.” He says “When it’s packed on a Friday night and there is a queue of people outside waiting to get in to the cocktail bar downstairs, people telling you how much they love being here or texting you the next day telling you they’ve had a fantastic time. That’s where I get the most fulfilment, by doing something that I love, that also makes other people happy.”

And even with the long hours, late nights and obligatory sore heads that come with running one of the most revered whisky bars in London, Simo says that he still doesn’t ever picture retirement.

“My Dad always used to say that if I wasn’t stressed, I was bored – I’m very good at handling stress thankfully – but for me the closest I think I’ll come to retirement is working from my laptop, maybe in a nice house in the south of France by the pool, with my dog, cat and the Mrs. But I will carry on working until the day I die, because I’m doing something I love.”

You can find Simo at Milroys, 3 Greek St, Soho and can follow their journey on Instagram. Simo also joined us on our panel at House of Killik Soho in January. If you missed the talk, or you would like to find out more about our upcoming events, you can sign up to our newsletter below.

Talking to First Sukpaiboon, HER Coffee