As part of our journey to redefine Wealth we are exploring what “A Life Well Lived” means: interviewing artists, entrepreneurs, explorers, and change-makers as they share their stories and ask “what is my life well lived?” Here we talk to Chris Keenan, a Potter based in Camberwell, about his work, his business and what living well means to him.

Having originally trained as an actor, in his mid-thirties, Chris decided he wanted a change and began a Pottery apprenticeship with internationally acclaimed artist and writer, Edmund de Waal.

“People say that you should try things out before you make a big leap. I didn’t do that, I just leapt in. But I wasn’t giving up anything lucrative, I was switching one insecure way of making a living – as an actor – for another. And even now there is still insecurity by being self-employed.”

“I hadn’t always wanted to be a maker” says Chris. “I had wanted to be an actor. But I enjoyed making, it was one of the ways when I was not working as an actor, of filling time. I could spend a day cooking a meal or making a shirt – there’s a precision to those things and an order, and the same thing goes for clay.”

“If you’d have asked me – or told me at 15 – that in my forties I would be making pots as a career I would have said ‘Oh yeah right!’. It’s not the sort of thing that had even crossed my radar.” 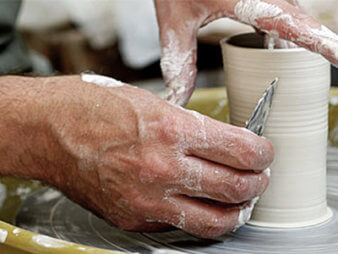 “It never feels like a grind, but obviously some days, some jobs do not fill one with absolute joy. Mixing glaze for example, is one of the first jobs Edmund ever got me to do because he’d simply mixed too much – he didn’t want to do it anymore. And sometimes now I’ll think ‘oh god, I’ve got to get everything out of the shed, weigh everything, I’ve then got to sieve it..’ so I wouldn’t say it’s pure unalloyed joy one hundred percent of the time.”

“However, once that focus has come in, I’m on my way. Each individual object I’m relating to – I’m working on that one thing which is very in the moment and is a lovely thing. They may all be similar, or of a piece, but they’re all different. That’s very attractive.”

“The business side of it was originally simply because I needed to make money. I think addiction came first, and passion came with acquiring skill and an understanding of materials, through doing, and getting better. What I think is really wonderful about this is that I still don’t think I’ve reached peak making. My making still improves and that’s a wonderful drug, when you can sense yourself getting better. I am passionate about it of course, but it is also how I make my living.”

“I knew I wanted to do it but there was no backup plan. Was that foolish? Maybe yes, maybe no.”

“Before you do anything I would say get as much information from as many people as you can. Do your research. But when you start learning something new, if that learning excites you, then you’ll progress. If your progress is good and you still love it, you might even find there’s a spark there, something that will keep you going.”

“When I started my apprenticeship with Edmund, the deal was I would do it five days a week, a full working day so it was 9:00 to 5:00. I was jumping in from scratch, I knew I wanted to do it but there was no backup plan. Was that foolish? Maybe yes, maybe no.”

“What was interesting for me as well was being on my own with Edmund, I didn’t have anybody to compare myself to, to say ‘they’re doing really well, whilst I’m doing really badly’ because it was just me. Also he never said ‘you’re ahead of where you should be, that’s great’ or, ‘I think you should be a bit better than this by now’ – so there was absolutely no pressure. I think that’s one thing that’s very hard to replicate now because we live in a much pressured world. So for me to have that isolated experience is quite rare.” 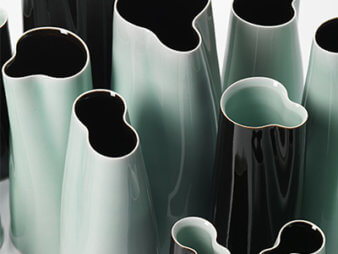 “It’s having a calendar which has projects in it that excite me for the future; it’s earning enough money to do enough; it’s people returning, or coming on the journey with me – people who want to see where I’m going with work.”

“There are people who have entered my life and I would never have met them if it wasn’t for pots. Some of those brief relationships have been so brilliant, such a wonderful addition to my life, and I won’t forget them. I won’t forget those people and why they bought work and how our conversations were.”

“I had never thought about that when I was learning, but it is a wonderful bit of added value to the job. The people you encounter and the opportunities I’ve received because of it.”

“I think these are attempts at living a good life – but for me it’s to be kind, to work well, to spend time with people you love, notice pleasure and moments of happiness, and pass things on. Give people information, it’s only information. And all of these things cost nothing.”

“Passion came with acquiring skill and an understanding of materials, through doing, and getting better.”

“The most fulfilling professional thing I’ve ever done was a show that came out of a residency I did up in the Lake District at an arts-and-crafts house called Blackwell. This is a house I’ve shown in since about 2003, and I had to write a 200 word application. I said that in a parallel universe Blackwell is my house, because I love it I think it is one of the most fantastic buildings that I’ve come across in my life.”

“I got to go there because I was awarded the residency and there were no restrictions, no limits on what I could do. I got to do functional work, installation work, interactive work, I even did some 2D digital imaging and nobody said no. Putting that show together, installing that show, and it being there was amazing. How lucky am I to have had that opportunity?”

“And it’s a slightly crass one, but personally sometimes cooking can still do it for me. I like pastry and so when I make a nice pastry case that’s fulfilment as well.”

“Retirement doesn’t really appear on my radar. I took out a very tiny pension when I was an actor and it’s still very tiny really. I think that I will always carry on making. But the other thing I have thought about if I have to stop because I can’t make any more, is becoming an extra in the film industry. I think that a £100 a day and a meal – I can sit there, I won’t be going “but I should be doing the acting job!” because my ego will have been bashed and knocked over X number of decades. But no, I don’t see myself stopping. It’s too involving, it’s constant.”

You can find our more about Chris, his work and his upcoming exhibitions on his website.