As part of our journey to re-define Wealth we are exploring what “A Life Well Lived” means: interviewing artists, entrepreneurs, explorers, and change-makers as they share their stories and ask “what is my life well lived?” Here, Andrew Weeber, owner and founder of the English vineyard, Gusbourne, talks to us about his businesses and what living well means to him.


When Andrew first took over the Gusbourne estate in 2004, the biggest challenge as he explains was not the British weather as you might expect, but instead “convincing my family that I hadn’t gone certifiably mad”.


As a business launched in his “second life” as he puts it, Andrew originally grew up in South Africa, and after completing degrees in Biochemistry and medicine, became an Orthopaedic Surgeon, working in Cape Town and then latterly here in the UK, for almost 20 years.

“I’ve been so lucky, I’ve never felt as though I’ve had a job. I enjoyed Orthopaedic Surgery immensely, from my second lecture in Orthopaedics I decided I was going to become an Orthopaedic Surgeon, I never deviated and I used to enjoy going to work every day – in fact I would disguise that a bit from my wife. And the same now applies to Gusbourne and the vineyards.”

So what about the move from Surgeon to running an English vineyard? Andrew explains that when he first began exploring the idea of starting a vineyard, the English sparkling wine industry was viewed as a “joke”. “It wasn’t really a joke, but it was perceived to be a joke.” he explains. “So I did my research, I read a lot [about wine making], I thought about it, and eventually came to the conclusion that it would be workable. I had always been interested in wine as a hobby and then the opportunity came up to acquire some prime land in the South East of England. I bought it, and that’s what started it all.”

With his wines now stocked in the likes of Fortnum and Mason as well as some of the country’s finest restaurants – from Le Gaveroche to The Fat Duck – he has certainly proven his point.

“I think in everything you have to be very honest with yourself and critically analyse what you’re trying to do.”
“I actually think that I’ve been very lucky, and that isn’t modesty – the site that I bought was far better than I thought it would be – but it’s a bit difficult to say to somebody “it’s good to be lucky!” But I was lucky in that regard. Right form the beginning I have always tried to do my best, and I don’t do things in half measures. I think that’s the important thing and being an Orthopaedic Surgeon was a great training ground for that because it’s one of those specialties where it’s wonderful if everything goes right, but a nightmare when things go wrong.”

“I think in everything you have to be very honest with yourself and critically analyse what you’re trying to do, and what the chances of success or failure are. Ask yourself what is the worst case scenario? The worst case scenario here was that everything would fail, but I had bought the land opportunistically and quite honestly, the value of the land was going up at the same rate I was spending the money. I was well-aware of this, it wasn’t an accident, so that mitigated a lot of the risk and gave me a lot of confidence.”

When it comes to living a good life Andrew says that’s easy for him, especially if you are lucky enough to do something that you love.

“Living a good life for me is to do no harm, having no regrets, respecting people – especially in work situations – and just doing your best wherever you can. Hopefully with a wonderful family which I’m lucky enough to have.” 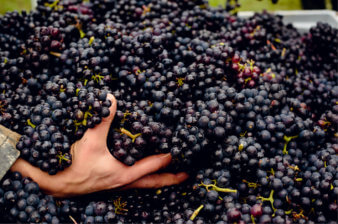 “I have always been a closet tree hugger and owning a farm has given me the opportunity to express this in terms of the vines. Hugging trees and hugging vines are very similar occupations, and doing it well, not defiling the land, is very important to me. I didn’t start off being terribly environmentally aware but the more grandchildren I have, the more interested I have become in the planet.”

“I found a lot of fulfilment in medicine, in Orthopaedic Surgery, and from Gusbourne. And now I find that I take a lot of vicarious pleasure in my children and my grandchildren, and if I have the ability to help them in any way, that gives me a great deal of pleasure.”

“For me wealth is about being able to do things for my family.”
“It is one of those questions I ask myself a great deal. When I look at people who are extremely wealthy – wealth to a degree that they will never be able to spend it – and I often think in their case it must be considered a scorecard of success; the more millions you have accumulated the more successful you are. Not the happier you are.”

“For me wealth is about being able to do things for my family. For example sponsoring education for my children, that’s the most important thing that wealth, or relative affluence – I suppose it depends on how you measure wealth – has enabled me to do. I don’t have any ambition at all to be the richest man in the cemetery.”

“It’s not that I dread retirement, or that I want to be frantically busy, but I’ve got one of those minds that I know if I stopped being involved with Gusbourne it wouldn’t take long and I would be involved with something else, almost as enthusiastically as I am about Gusbourne.”


“So no, I don’t envisage retirement.”

The Gusbourne estate is situated in Appledore, Kent, and is less than an hour from London’s St Pancras International Station. You can find out more about their calendar of tours, tastings and events on their website.

Will London be replaced?
Read More
SHARE THIS ARTICLE