As part of our journey to re-define Wealth we are exploring what “A Life Well Lived” means: interviewing artists, entrepreneurs, explorers, and change-makers as they share their stories and ask “what is my life well lived?”  Here, Edmund le Brun and Flore de Taisne talk to us about their business, Ishkar, and what living well means to them. 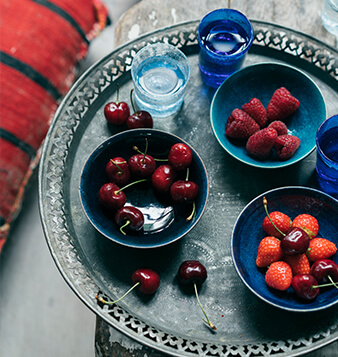 Flore and Edmund are probably better described as guardians of craftsmanship than they are retailers. After meeting in Afghanistan where they were both living at the time, the couple went on to set up Ishkar, a collection of beautifully curated artisanal products made by craftsmen and women living in countries experiencing conflict. They only work with countries cut off from traditional international markets by war or insecurity, and each purchase creates an economic opportunity where it is most needed.

Currently, Ishkar have a residency on Baker Street where they host monthly events, from panel discussions with journalists and craftspeople, to Syrian dinners, film screenings and workshops – opportunities to surprise, inspire and provoke discussion around the political, economic and cultural elements of the countries they represent.

“We set up Ishkar after living in Afghanistan for three years. We came to know some really talented craftsmen who were making beautiful, unique things, but had nowhere to sell their craft. There were lots of charities providing great training and setting them up with workshops, but struggling to get their products in front of customers in Europe and North America. So we wanted to bring these products, and the stories of these artists and craftsmen that come with the work, to customers here (in the Western World).”

Setting up Ishkar wasn’t a childhood dream for the couple though. Edmund reflects on his 16 year old self and whether he’d have seen himself selling hand-blown glass – “Not at all, no – he’d be very surprised – I think that’s probably true for us both.”

“It was just a test really, but we ended up selling about $10,000 worth of cufflinks in two weeks. Naturally, all of a sudden it got very interesting.”

“When we were in Afghanistan we had quite a lot of spare time and Flore and I ended up designing some very simple cufflinks. We set up a website in no more than a couple of days – back in 2015 – and launched it a few weeks before Christmas. “It was just a test really, but we ended up selling about $10,000 worth of cufflinks in two weeks. Naturally, all of a sudden it got very interesting.”

But, as Flore adds, “Ishkar isn’t just about selling products. That is not what motivates us. We are a platform for storytelling; we help identify development issues in these countries. Bringing the beautifully crafted objects that reflect the history, skill and culture is just one way of doing that.”

“Exactly” agrees Edmund “What really excites us is showing people that Afghanistan, Syria or Mali aren’t these terrible places fraught with danger and misery. They are really wonderful places that have got so much energy and life, it’s just that people don’t hear that story very often.”

“Success for us would be keeping these industries alive.”

“To change perceptions, to bring stories that are rarely heard to people and to ensure that these skills aren’t lost” says Flore. “Success for us would be keeping these industries alive.” Edmund goes on to explain that their most iconic product – a selection of strikingly colourful, hand-blown glassware – is made in the last glass workshop in Afghanistan; an industry that has been around for 2,000 years but is now near extinction. “Failure would be this industry dying, and success would be seeing a few more of those workshops realised, and perhaps dozens of glassworkers being employed.”

The company prides itself on its social impact, from changing the economic opportunities of the small businesses they support, to their work with local NGOs to help fund development projects. These range from providing craftsmen with educational opportunities, through to supporting local schools and healthcare clinics. This positive, sustainable driving force of their business surely brings them a sense of fulfilment? 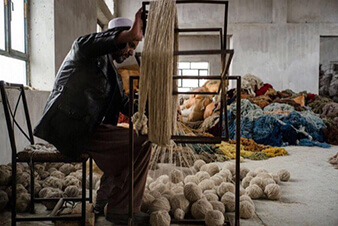 “Yes absolutely” agrees Flore. “travelling to meet these artisans who are doing something really unique, but have no idea the level of demand for what they are doing is outside of their own ‘worlds’. We went to Timbuctoo recently and met a guy doing some amazing stuff with textiles, but he has no idea what people think of his craft in London or in the States. He has no idea for the demand and it’s amazing to be able to bring that message to him, and in turn support his livelihood, his skill and his story.”

When it comes to wealth the two certainly don’t view it in monetary terms. “Wealth for me is the luxury of simply being able to use your time how you wish.” says Edmund. “And when it comes to living a good life, for me is probably the gathering together of a kaleidoscope of extraordinary experiences, and building strong and loving relationships along the way.”

Edmund & Flore are founders of Ishkar (www.ishkar.com). Edmund also joined us as part of House of Killik Soho. To find out more about our upcoming events you can sign up to our newsletter below.

What is the Future of Craftsmanship?